To mark Small Business Saturday, which is designed to encourage everyone in the UK to support our small businesses, Stephen Allott, the Crown Representative for SMEs, writes about G-Cloud and the opportunities opening up in government IT for small, innovative suppliers.

What share of public sector IT business do SME suppliers win, given a perfectly level playing field? Astonishingly, the answer is 56%. Yes, as of the end of October 2013, 56% of of total public sector spend by value through the G-Cloud framework had gone to SME suppliers.

Government Digital Service (GDS) and the Crown Commercial Service (formerly GPS) have shown what is possible if you take a new approach to building digital government. With G-Cloud they have captured huge value from SME suppliers by doing things in a new way – not by favouring SME suppliers.

This figure of 68% is in stark contrast to the 10.5% of central government spend in 2012/2013 (across all categories not just IT) going directly to SMEs when the playing field is not level. Figures for the SME percentage share of central government IT spend through all channels (not just G-Cloud) are not available, but let’s assume they are not materially different from the 10.5%. Even after adding the SME share of spend down the supply chain (9.4%), the impact of the tilt in the playing field is clear. When the playing field is level, the value of business won by SMEs (68% against about 20%) is more than three times what it was in the past.

This matters, because when SMEs win IT business they win it because they offer much better value. I don’t have exact figures, but my impression is that savings of between 25% and 75% are not uncommon when using SMEs. Levelling the playing field for SME IT suppliers is a huge opportunity to generate savings for the taxpayer.

But how big an opportunity? The current run rate of annual spend is now over £80 million, and it’s growing fast. Look at this chart: 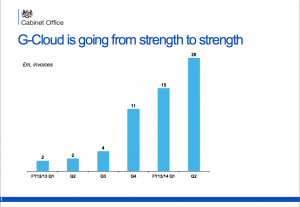 How big could G-Cloud get? Five or 10 times the current size? Government, which spends billions on IT, is going digital. This could mean savings in the hundreds of millions, and the orders going to SMEs would also help growth in the economy.

A plan to go forward

To help the G-Cloud framework grow as fast as possible, I believe we should:

Now is the time to get on board

When SME suppliers offer what we need and at the best value for money for the taxpayer, government should buy from them every time. The G-Cloud is showing the way.