The G-Cloud framework was first live in February 2012. As usage of the framework increased, it made sense to set up a Twitter account with the handle @G_Cloud_UK. We used this Twitter account as a channel of communication with both buyers and suppliers and have built a following of over 7,500.

In the future, other digital services from different frameworks will be added to the Digital Marketplace. For example the ability to find people or teams to help design and build bespoke development projects in an agile way from the Digital Services framework.

Why we’re switching to @GOVUKDigimkt

Because of these two reasons we plan to change the Twitter handle to @GOVUKDigimkt to consolidate and streamline our approach to how we communicate via social media.

This doesn’t mean that G-Cloud is being phased out or that G-Cloud is no longer a significant part of the platform or process. The change in name is simply a more sensical way for us to communicate about Digital Marketplace, G-Cloud and Digital Services, as well as any other framework that might be added in the future. 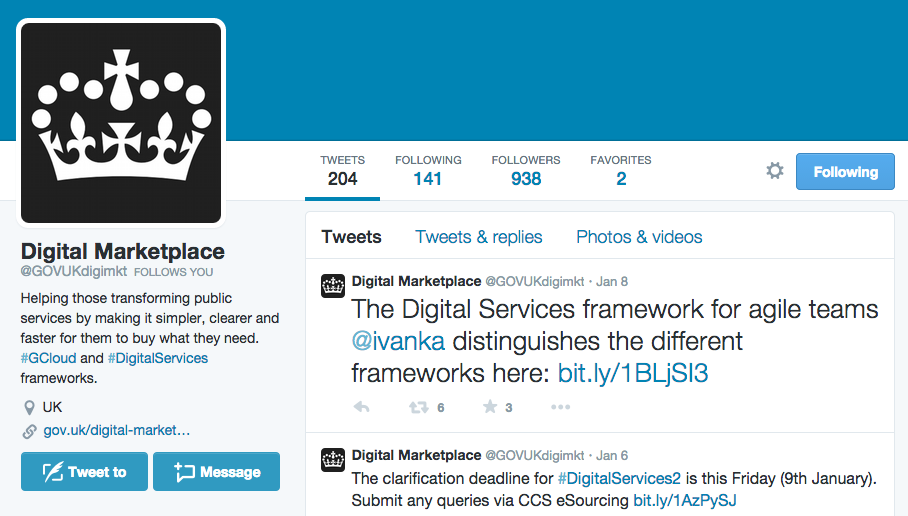 How we’re switching to @GOVUKDigimkt

Tweets from @GOVUKDigimkt about the G-Cloud framework will carry the hashtag #GCloud. This hashtag can be searched to isolate tweets we send about G-Cloud. Please bear in mind that other accounts may also be using the #GCloud hashtag to categorise content.

If you’re following us @GOVUKDigimkt follow @G_Cloud_UK now or before the end of February to ensure you stay connected with us.